blog014 Down To The Wire 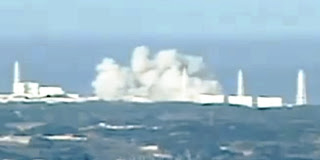 1. I love Japan. Most of its amazing art and culture is ancient. The modern technology that wiped out The Last Samurai

may now also wipe out Japan.
It's a strange thing to me that, as smart as we pride ourselves to be, human beings have not yet figured out how to be more intelligent than bacteria. Seems like we can't actually change our behavior until it hurts too much to keep doing it the old way, even if the old way kills us. To quote Richard Heinberg in his Rob Hopkins interview posted at Transition Culture, "I wish I could say something more cheerful..."
In the interview Rob Hopkins (originator of Transition Towns) addressed Richard Heinberg with this question (perentheticals added by me):
In Powerdown

, you proposed four possible future scenarios:
1. Collapse (social and ecological) (What about the economy? Stupid question.) (regardless of which scenario eventually plays itself out, we are also on the fast road to global collapse),


2. Waiting for the Magic Elixir (hoping for a technological save - or compassionate aliens),
3. Powerdown (conscious global collaboration to downsize consumption and population) (doing this would prove we are intelligent),  and

4. Last One Standing (military contest - winner takes all) (all of what, though...).

Do you still see those as being the four key scenarios?

Richard Heinberg said: "Clearly, governments of the world still appear to be on the track towards ‘Last One Standing’. Clearly, ‘Powerdown’ is the best way forward on a collective basis, and clearly, ‘Building Lifeboats’ is not a bad idea – to the extent that one is not just going about that in a survivalist frame of mind but on a community basis of building some kind of collective infrastructure for survival and renewal and not just heading for the hills. I don’t think there’s much of a future for our species in terms of individual survivalism."
So we are building a lifeboat called Tempelhof . And you can too, because at Tempelhof we will provide Arkbuilder Training School. You can read about our project at Transition Network or Global Ecovillage Network. 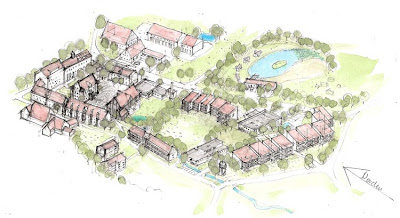 I'm inspired because it is straightforward to personally upgrade your own thoughtware.
I'm flabbergasted because even though it is so straightforward, the possibility of upgrading your thoughtware is not offered in school or university. One has to leave the center of mainstream and read books and find authentic training programs to do it.
What brand of thoughtware are you using? You may be using very old and, more importantly, very outdated thoughtware.
Along those lines I wrote 5 short videos using http://www.xtranormal.com/ text to video animation. You might enjoy them.

3. I just finished reading a wonderful book by Martin Prechtel called Secrets of the Talking Jaguar

. In it he speaks about community in a startling and refreshing way that I never thought of before. On page 279-281 he says:

The secret of village togetherness and happiness had always been the generosity of its people, but the secret to that generosity was village inefficiency and decay... all life must be regularly renewed. To do this, the villagers come together once a year at least, to work on putting back together somebody's hut, talking, laughing, feasting, and helping wherever they can in a gradual, graceful way.
If a house is built too well, so efficiently that it is permanent and refuses to fall apart, then people have no reason to come together. Though the house stays together, the people fall apart, and nothing gets renewed. Smart people might be able to invent excuses to get together, but this is too abstract and hollow, and such contrivance insults the soul. People have a genuine need to make things with their ingenuity and with their hands... Violence is close behind when people won't come together to remake each others' houses.

, or Malidoma Patrice Somés Of Water and The Spirit

, you will love Secrets of the Talking Jaguar

Posted by Clinton Callahan at 11:07 AM No comments: