It's unbelievable.
A lot has been happening in the life turbulating around me.
It's so much so fast and so amazing that I must stop for a few minutes and tell you about some of it.
To begin with, my teacher Lee Lozowick died 16 November 2010 in his own bed in Prescott, Arizona, from a long and nasty disease.
I wasn't there, but they say he died with a big smile on his face.
What a way to go!
2. If I were to write a SPARK right now it would say this: Behaving as if you are powerless against a system is indistinguishable from being a designer and perpetrator of that system. (See David Hazen's blog below.)

. It is scathingly clear and to the point:
The Empire Is

Consuming Us
(either we eat them or they eat us, so let's get cooking).
He means it.
The interesting thing is that if you turn the book over and read the back cover, what you will find is:

plus English is also spoken in #20 by Ross Jackson (founder of the Global Ecovillage Network) http://www.youtube.com/watch?v=dEnYxhJKmw0 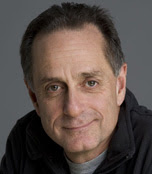 5. I recently got to connect with David Diamond, head joker at the Headlines Theatre in Vancouver, where they do this incredible inquiry on stage with the audience called Us and Them.
David writes: A new revolution is required on the planet. Somehow, we must find a way to let go of our mechanistic need for certainty - our need to know that "we" are right and entitled and therefore "they" must be wrong and not entitled. We must find a way to relax into the certainty of UNcertainty - to know that in whatever geography, whatever politic, whatever context, there is no certain "them"; there is only an ever-evolving us.
David has a new book out called Theatre for Living

: the art and science of community-based dialog. I am just beginning to read it, and it feels excellent. 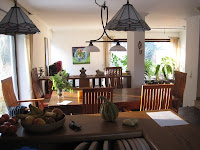 6. Our house is up for sale.
It's a 4 bedroom, 2.5 bath duplex located south of Munich, close to the Höllriegelskreuth SBahn 7 station. The house will be connected to city geothermal heat this year, has close-by groceries, gas, and a natural pathway along the Isar River to the beautiful little village of Pullach, where Café Dolce serves the best haselnut gelato in the whole world! Really!
Where are we moving?

7. ...to Tempelhof, an ancient little castle being transformed into a sustainable culture research ecovillage. http://www.schloss-tempelhof.org/ (the website is all in German...)
﻿
﻿

Our 31 hectares of farmland in Baden-Württemberg, Germany, is registered as a Transition Initiative and an ecovillage, and will be the new headquarters for Next Culture Research & Training Center.
More about this later, I'm sure...
8. I found a new ally in David Hazen's blog Victim, Rebel, or Co-Creator? from 30 November 2010:
http://davidhazen.wordpress.com/2010/11/30/victim-rebel-or-co-creator/ He writes:
I do not submit. I have the power to create an entirely different social structure. I have the power to create a world that works for all, and it does not depend upon the domination system to disappear for me to engage in this creative act, although if I persist in exercising my creativity I am absolutely certain that the domination system shall eventually collapse, implode, and die because it will be seen clearly as dysfunctional. This time, there will be no blood, the military-industrial complex will simply dry up and blow away, useless and unwanted.

No struggle, no rebellion, no acts of violence are necessary to destroy the domination system. The dominators are already in trouble and worried about their own survival, and they would be greatly reassured of their power if someone would only rise up in rebellion against it. How reassured will they be when we simply walk away from the battlefield? The presence of millions of culturally creative revolutionaries everywhere on the planet is the beginning of that walk, and is now unstoppable. If you have any doubts about that,
ask Captain Jack Sparrow:
http://www.youtube.com/watch?v=QQ_1ZZSNFuQ

Posted by Clinton Callahan at 10:30 AM No comments: