1. The universe put me and Pierce Brosnan face to face at a the classy Ceramica Casola shop in the coastal village of Positano, Italy, on Monday 16 May 2011, which turned out to be Pierce's birthday.  I'm a year older than he is!

I said, "People are starting to feel the pain of what is happening in the world."

He said, "You got that right!"

Pierce was in Italy shooting All You Need Is Love. 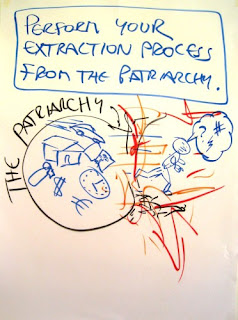 2. At Tempelhof, 23-25 September 2011, during the Men’s Lab, twenty-three men exited the patriarchy.
There are various ways to exit the patriarchy. One way is to face the immense but still unconscious price you pay to remain in the patriarchy.
"Price?" you ask.
Think about it. You weren't schooled in a way that empowers your natural talents but rather to fit into a system designed to serve a wealthy elite. You were born guilty and trained to blame others and try to get away with anything you can. "Responsibility" is a dirty word in the patriarchy - only stupid people behave ethically or take responsibility. You made an unspoken promise not to expose the emptiness of "success" as defined in this system. Anybody can be bought. Nature is valued only when money changes hands. Your mind has been over-taxed while your heart and soul shrivel in neglect.  You can't articulate the pain in you because the training is to stay disconnected and numb, without encouragement for compassion, empathy, relationship or sensuality. Instead you get addicted to adrenaline intensity, fighting and competing with others for power and material possessions just to survive. Time is money. Women are sex objects - disposable wives. Children are a problem. Death is a fantasy. There is no space for simply being.


When you were born you had to choose: join the patriarchy or be abandoned. The ultimate price of becoming a patriarch is that you do not get to become yourself.
To stop paying that price means to exit the patriarchy. No one can exit for you. Exiting takes every effort you can make and is extremely personal, yet, you cannot escape alone. You need something to exit into.

That is why before exiting we men made a new pact amongst ourselves. "I have a new pact."

Through this pact a circle of men now stands that "next culture" exists – the culture emerging after patriarchy (see Map of the Present Epochal Culture Shift).


Our new pact makes it easier for you to escape the patriarchy because there is already a place to go to. It is called "next culture" - archearchy - the creative collaboration of the archetypal masculine and the archetypal feminine.
(I heard a rumor that in 2012 there will be a Women's Lab...)


﻿
﻿3. From September 26-27 Marion and I joined a group of social entrepreneurs at Taiji Center in Oslo, Norway,  to welcome eight Mayan shaman.

They were four couples, and when they spoke they emphasized the importance of men and women working together, and then they demonstrated it through their loving interactions and collaboration.

These eight shaman, living in four separate villages, speaking four Mayan dialects, together got the "instructions" to visit four northern hemisphere countries (Norway, Japan, Arizona, and Guatemala) so as to deliver a message and to perform an awakening ritual.


The Mayan's message has three imperatives, in short, as follows:


The message is clear: living in a spiritually fulfilling, socially just, ecologically (and economically) sustainable world requires changing the dream (the nightmare) of the "North," meaning the dream us "white folks" are living.

﻿By taking responsibility for the dream you are creating, you gain the possibility of intelligently changing it. This is why I think that Awakening The Dreamer / Changing The Dream should be integrated into the core curriculum of any modern school.

Tuesday afternoon the Mayans led a walk along the waterfront of Oslo with about 300 people all carrying flowers and fruits as offerings of praise to Mother Earth. We arrived in the center of the old town, a Celtic power place upon which a church had been built that is now in ruins. Here the ritual was performed to awaken Europeans to our connection to Mother Earth.
4. I would say that Arnaud Desjardins was my teacher Lee Lozowick's best friend. Lee died November 2010. Arnaud died July 2011.

Sometimes I feel like Luke Skywalker, when his teachers one-by-one die and line up in heaven to provide coaching and support from out of the body.

I'm lucky to have been around these two men, now and then, when they were with each other privately, eating, walking, haggling prices, speaking to groups. When I need a role model for adult manhood, or for friendship between men, I have Lee Lozowick and Arnaud Desjardins to look to.


5. If you haven't seen it yet, you might want to check out the four-minute video we made that captures the energy and purpose of the Expand The Box training.


Posted by Clinton Callahan at 1:44 AM 2 comments: